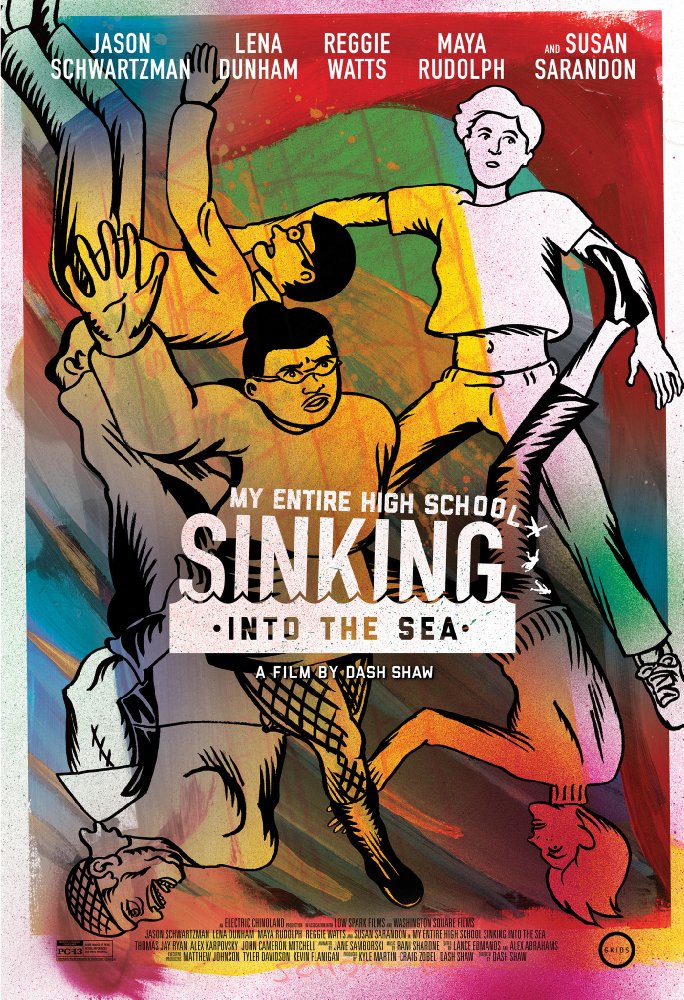 My Entire High School Sinking Into the Sea

Wow. A Poseidon Adventure reboot; but this one is animated and set in a genetic high school filled with all the easy stereotypes we remember growing up with. Dash and Assaf (voiced by Schwartzman and Watts) lead the charge; they write a school newspaper no one reads filled with the pointless pontification no one cares about. It’s edited by calmer and more cynical Verti (voiced by Rudolph), and the poor ratings are breaking up the team. Now out of freshman hell the guys sit farther back on the bus, closer to the cool kids. Their school is expanding, but the permitting process was incomplete, and a minor earthquake sends the whole building out to see. Few high schools have flotation devices, nor are they sea worthy. Their only salvation requires climbing up to the floor, and it’s a hellish joinery under water, thought rabid sharks, and scaling up damaged athletic bleachers. The core team survives, goes on to write a book, and suffer bad reviews. Dash sees the error of his literary ways, and admits “Next time I write a novel, it needs to be shittier…and more popular.”

Positives: the animations style looks clever and sporty, the press release points out is all done in GIF format and the movie assembled on inexpensive software. The story is clean and tight, if derivative: A group of misfits teams up and uses of their various skills and quirks sum up to save them. The post climax wrap up is amazingly truthful. These ARE kids and neither their literary skills nor story telling is up to snuff, but they realize that and continue to “grow”. Negatives: it’s a weird but trite story line, the animation at times is disturbing (lots of dead bodies and strobe effects) and the story motivation feels contrived. While I was often gripped by the struggle, there were times I went “Nooooo…not deus ex Machina AGAIN!” Overall, this is a fun and fresh look at an old story but there are enough beginner errors here that I hope the team grows themselves, and makes another film.

This film was presented as part of the Florida Film Festival.