From the 20-something newbie seated to my left, hoping to hear a few ’80s-era faves, to the 50-something diehard seated to my right, craving deep-cut classics, fans of ALL ages packed the 2,000-plus-seat theater for a live concert performance from one of two incarnations currently embracing the iconic Yes legacy. Neither of my two “neighbors” tonight would go home disappointed.

The purveyors of prog took the stage at precisely 8pm – much to the delight of what looked to be a sold-out house. The crowd roared as Rick Wakeman made his grand entrance, wrapped in a regal-looking, black and white floor-length velvet cape. Joined immediately by Rabin, Molino and Pomeroy, the combo kicked into the 1983 instrumental, “Cinema,” as Anderson made his equally well-received entrance in short order.

A visually appealing presentation, the show looked as good as it sounded – offering a clean-looking stage set-up and boasting an array of colorful, state-of-the-art, non-seizure-inducing lighting.

My two “neighbors” both had seemingly reached personal levels of satisfaction, posthaste, as the band rolled through such early-era classics as “Perpetual Change” (1971) and “And You And I” (1972), along with latter day 90125 staples, including “Hold On” and “Changes.” Truth be told, the only fans who might have been left in the lurch were the casual admires (myself included) who felt the noticeable absence of such signature hits as “Starship Trooper,” “Yours Is No Disgrace,” “I’ve Seen All Good People,” “Long Distance Runaround” and “Leave It.” 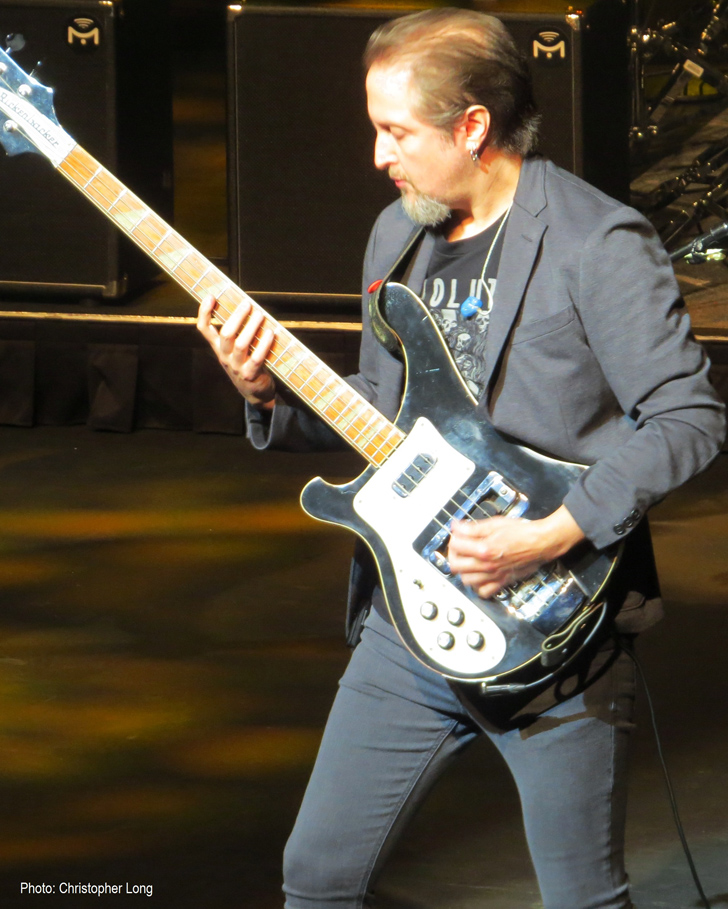 For his part, Jon Anderson connected easily with the audience, proving to be an engaging, unassuming host. And although his speaking voice sounded tired and raspy, the acclaimed vocalist and multi-instrumentalist nailed all of his singing parts beautifully. In fact, as one would expect, given the band’s impeccable reputation, the entire ensemble delivered absolutely masterful performances. And of the many noteworthy musical moments, bassist Lee Pomeroy’s solo during “Heart Of The Sunrise” made for a particularly energized highlight.

Coming out of a rousing rendition of their chart-topping 1983 hit, “Owner Of A Lonely Heart,” merged with Cream’s “Sunshine Of Your Love,” the show’s “WOW-factor” took a nosedive, as band members turned their backs to the audience for a lengthy, disconnected jam. However, the sizzle returned to the set with the show-closing, encore anthem, “Roundabout.” A bona fide “Bic moment,” to be sure.