In the days leading up to Sweet Crude’s gig at the Crowbar, shows began cancelling due to the Covid-19 pandemic. At first it was just a few shows. When the South By Southwest convention cancelled, all of us music types knew thing were getting serious. You don’t cancel the biggest industry event on a whim. So many local events had already cancelled so I called the Crowbar the night of the show. The voice on the phone said the bands were be playing as scheduled. So I got in my car and headed out.

When I got to Ybor, there was an eerie quiet in Tampa’s main entertainment district. Thursday night is usually a big night at the dance clubs. As I walked down 7th Avenue, I saw that clubs were open, but I saw more staff members on the street than partiers. The only other time I’ve seen the Avenue this quiet was during hurricane season when there is a storm in the Gulf, predicted to make landfall within the next 24 hours.

I wasn’t planning on writing about this show. I catch the band every chance I get ever since I first saw them at the New Orleans Jazz and Heritage Festival a few years ago.

Sweet Crude took the stage around ten thirty. Before they started, Sam Craft announced this was their last performance for the foreseeable future. They launched into an inspired set giving it all they had. The few dozen people in attendance responded with in kind. The band’s version of indie rock always makes me think of the Talking Heads had emerging from the Francophone parishes of Louisiana. Lately, they’ve been showing classic soul influences. Vocalists Sam Craft and Alexis Marceaux have added some slick dance moves to their performance, adding a bit of Temptations to the mix.

The band showcased a lot of material from their forthcoming album. Sam told us about the Loup Garou (werewolf) before they launched into the new single, “Rougarou.” Alexis sang the spooky techno-swamp stomp entirely in French. A lot of their songs are in French or French and English. They got the crowd to shout along to the rousing “Deballlez.” “Sun Sept” inspired some energetic dancing. Knowing this would be their last show for a while, both the band and the audience gave it their all.

A few of the songs took on added significance. “One in the Bush,” the lines “no need to be so upset/this is as good as it gets,” had greater gravitas. “Mon Esprit” is always moving and always has spiritual overtones. That night it felt more like a prayer. I felt like Alexis was using her powerful voice to connect us with something universal. It felt like she was casting some kind of protective spell over us. I hope it worked. We can use all the help we can get. 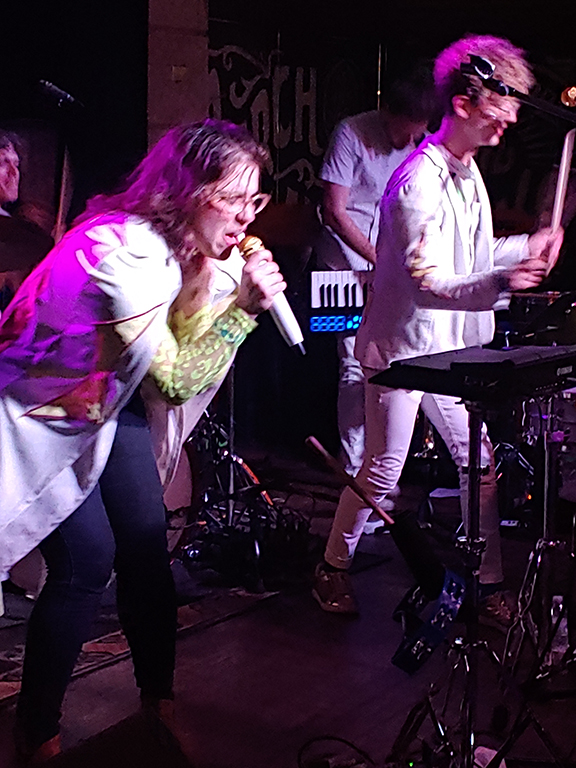 When I left the Crowbar, the streets of Ybor City were even more deserted. This is going to be our normal until the Covid danger passes. I guess I’ll have to accept this is as good as it gets (for now).