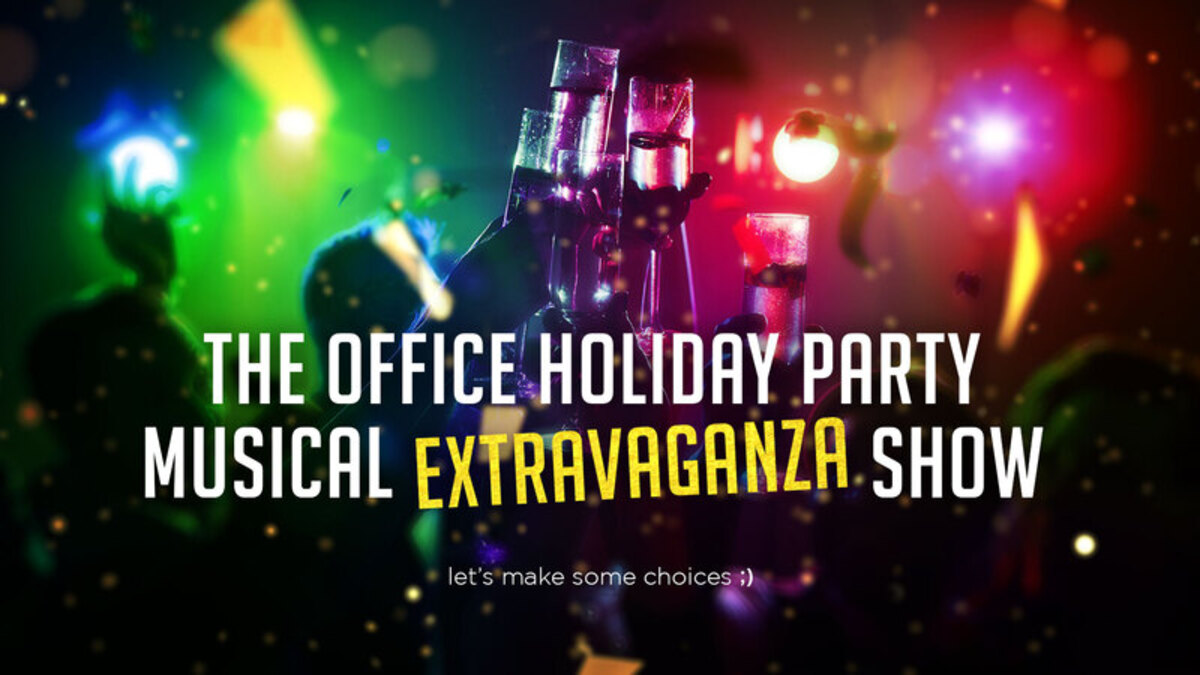 This year was way more hectic than most, at least in my schedule. I could only fit this party in near its closing night, so if nothing else, the cast was well oiled. The Office Holiday Party Musical Extravaganza Show reprises all the dreaded employer-sponsored parties so many of us suffer through this season and takes us into the Never Never Land of trying to make nice with coworkers we hate. Professionally, of course. These coworkers MAY actually be nice in their home lives, but you’ll never figure that out during the Secret Santa gift exchange. At least, I never did.

We enter the lobby space and receive a “Hello My Name Is” sticker, the sort that successfully resists attachment to every sort of fabric. But they do stick to your forehead, so there’s always that option. It’s a vaguely brisk night, and the TV is exploding over the revelation it’s cold in a North Dakota blizzard, and tonight Orlando may drop into the 40s. But inside the Ren it’s warm, and there’s an almost full bar with holiday-themed cocktails made with a real bartending jigger. I’ll say this about the Ren: their bar service offers the best drinks menu of any local theater space. And I know, I’ve checked them all out.

Seating is random, and I arrived a bit late but found and old acquaintance to chat with pre-show. The crowd filtered in and the energy rose, and soon the announcer began the festivities. We find all the office stereotype: the ultra chipper secretary, the old guy who will never have a promotion, the ultra religious couple trying to pray away the gay. You can imagine how that works in the Renaissance space. Musical numbers pop up here and there, and there’s enough of a plot to hold the party together, but it’s really about the ensemble numbers, as dollops of holiday cheer permeate the room amid the backdrop of inner angst. There’s an opening announcement that the company was sold, and this office will shut down, so party hardy. I love it when they make those announcements after you have cleaned out the local Toys “R” Us and lost the return receipts. And as for downsides? Oh, yeah. There’s an audience singalong. I stepped out for a rest room break for that one. You really don’t want to hear me sing.

So whats the takeaway? We’ve all been to soirees like this, had too much to drink, and made some bad holiday decisions, and not just in the sweaters we wore. These are real people in a real-people job situation, where the future is uncertain and the best you can hope for careerwise is a parking spot and maybe an office with a door that closes. Maybe you get the staplers, maybe you don’t. The fun is in the anticipation, and the drinks are stiff, and if you can meet a friend or two unexpectedly, well that’s just frosting on the punch bowl.