For my third dose of the Interpol live experience, I fought my way through the Universal Citywalk crowds and into the comfy confines of the Hard Rock Live on what I am marking down as the first day of fall (when you can make the long journey from the Universal Studios parking garage to the venue without breaking a sweat, summer has officially ended). 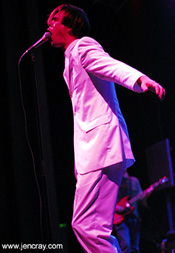 98% of the time I am a live band girl, meaning, if a band can win me over with their performance I’m a fan for life, even if their studio efforts aren’t as strong (examples: Mute Math, Th’ Legendary Shack Shakers, Street Drum Corps). If their studio albums are great and their live shows even better (The White Stripes, The Raconteurs, Riverboat Gamblers), then I bow down before the musicians and praise them ever chance I get because to achieve greatness in both mediums is a feat and a half!

However, I am also a girl who will give a band a chance, again and again and again, to blow my mind in concert if I love their albums. It’s the reason I keep going to see Kings of Leon and Tiger Army. It’s what brought me, once more, to the feet of NYC’s Interpol.

Before those boys could redeem themselves from their prior yawn-able 2005 performance, I fell victim to Liars. To call this L.A. band “experimental” does not fully highlight the bizarre musical world they inhabit. Frontman Angus Andrew Jagger-struts the stage in a David Byrne-ian white suit and tie, while howling an unbearable howl. His bandmates create a barrier of sound describable only as noise, and I’m not saying “noise rock.” Sonic Youth is noise rock, Liars are just unstructured noise! When their final song- a pseudo ballad- gets more than a few lighters swaying in the air, I can only laugh at the absurdity of what people will convince themselves that they enjoy if enough others tell them it’s cool. 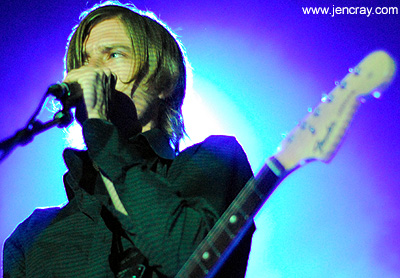 After 30 minutes of migraine muck, I was heartily looking forward to an evening of cool, moody post-punk revival rock.

The sharp dressed men stepped coolly onto a dimly lit stage, as frontman Paul Banks led into the opening cut off of their 3rd album, Pioneer To The Falls. 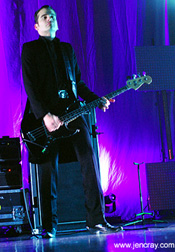 It’s slow, it’s dark, it’s a gorgeous way to open a show and his ever-convincing voice has never sounded stronger. From there the band sped into a nonstop set of old and new, tossing in the pleasing gems like “Evil,” “Narc,” and “NYC” every now and then to keep the audience in the palms of their slick hands.

Guitarist Daniel Kessler was the sole bearer of energy on this night, and his youthful jerks and animated guitar face added worlds of merit to the band’s show. Once more, bassist Carlos D just stands cooler-than-thou on the side of the stage- like the band’s mascot whose style and bass thumps are more than ample enough to allow him this quiet side stage retreat. Drummer Sam Fogarino is all but invisible in back, were it not for his beat that keeps the whole thing together.

And then there’s our fearsome frontman, Banks. He’s one of those shy singers who hides behind his hands, the mic stand, his guitar, his hair- whatever he can get behind. This time around he opened his eyes a bit more, smiled here and there, and even managed to say “hello” to the crowd. While nowhere near the frontman he could be (Does he know how good of a singer he is?! Has noone told him?!), this was the most comfortable I’ve seen him yet onstage. 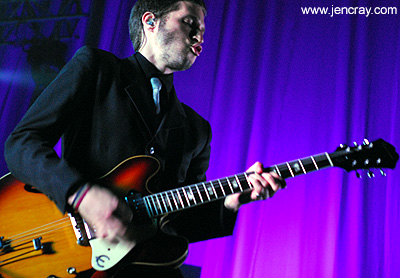