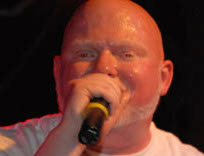 Minnesota-based emcee Brother Ali knows what it means to grind and persevere in the rap game. Since 2000, he’s released a solid set of albums/EPs and honed his live show skills by opening for fellow Rhymesayers labelmate Atmosphere while trying to make a name for himself in the independent hip hop scene. But I was surprised at what I felt the moment he grabbed the mic and started to rhyme.

Ali rapped more gratitude than attitude, sending a refreshing surge of celebration through the Metro. It was welcomed but caught me off-guard because he hasn’t always approached his live shows or his albums like this before. The intensity was still there, but something made me feel that Brother Ali was adding a new lament to his performance. Maybe this was because I knew what to expect and he didn’t have to prove anything, like he had to in 2000 when crowds were still not quite sure how to take or respond to the commanding stage presence of a white albino Muslim rapper from the Midwest.

On previous albums and tracks like “Uncle Sam God Damn” and self-disclosing bio track “Forrest Whitaker,” Ali has garnered controversy and attention for his ability to sling complex and politically-outspoken rhymes openly, telling about his struggles with divorce, homelessness, and race. It makes sense because, like all new artists, Ali has had a lot to prove early on in his career. And it’s not until you see him work a live crowd that you fully respect his ability to channel his old-school hip hop heroes, KRS-ONE and Rakim.

Before the show, I had a feeling that Ali’s live show might be different as I traveled through his latest album Us (2009). It’s a chronicle of how far he’s come as he further shows off his ability to transform life’s demons into recorded diamonds and deliver his strongest album yet. This time around the beats are better and he uses third-person storytelling to tell his tales, taking you into the belly of a slave ship (“The Travelers”), through the struggles of a street preacher and a flippant congregation (“Breakin’ Dawn”), and into the mind of a displaced and conflicted Somalian (“Tight Rope”). Credit Ali’s longtime production crew, Atmosphere’s DJ/producer Anthony Davis, and others for creating a backdrop full of slick, funky, and juicy rhythms, mighty boom-bap beats, and swelling gospel-like choir choruses. Toss in a few slower soulful jams and it’s no surprise that Ali is busting at the seams to celebrate – because what you have with Us is a sonic pallete perfect for soaking up with headphones solo late at night or dancing with a crowd live in a club.

Ali seemed less concerned with proving himself and more focused on taking care of the crowd psyche and paying tribute to his vocal and lyrical influences. Near the end of the show, he took a moment to address fans’ mental health suggesting that they turn to blues legends John Lee Hooker and Muddy Waters to “lift their clouds of depression.”

But there was nothing depressing about the concert, and I could have written a whole separate review of how Ali was nearly upstaged by the opener and newest signee to Rhymesayers, rapper/producer Evidence, formerly of California hip hop collective Dilated Peoples.

Before joining up with Rhymsayers in 2009, for the last few years Evidence has been releasing solo albums and producing guest beats on tracks for Kanye West, among others. He confessed that it had been a while since he last toured so he was hungry to perform. He floated around the stage like a welterweight prize fighter slinging rhymes, flashing smiles, and connecting knockout punch lines, mixing a medley of tracks from his Weatherman LP and new songs from forthcoming 2010 album Cats and Dogs. He also tempted fans saying they could expect a Dilated Peoples reunion soon.

Though Evidence’s set made it feel like a double headliner, I was quickly reminded by the explosion of fans jigging, shucking, and jiving during Ali’s finale that the reason everyone came was to get down to (and breathe in) his funky, groovin’ and joyful “Fresh Air.”