An interview with The Knack’s Doug Fieger. 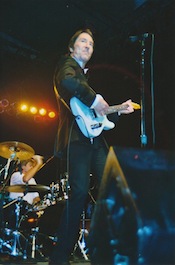 If you were alive and cognizant of your surroundings in 1979, you couldn’t escape the pounding bass of “My Sharona.” Everyone on earth seemed to follow the album’s advice, and got The Knack – you couldn’t listen to a radio for an hour without hearing them.

The Knack’s reign was short, but incredibly influential – not just for the New Wave acts that immediately followed them in the early ’80s, but for power pop bands of another generation. The Knack’s blend of the bombastic, feel-good pop of their youth (Dave Clark 5, Paul Revere & The Raiders) with the Mod, lyrical sensibilities of The Kinks, in turn has doubtlessly inspired the punchy, chord-driven alternative rock of today. Green Day comes to mind.

Sabotaged by the very label that once touted them as the next Beatles, The Knack disappeared, then reappeared with a lower radar visibility – but nonetheless kept making great music.

Tragically, The Knack’s career has come to a close with the passing of frontman/ songwriter/ guitarist Doug Fieger on Valentine’s Day 2010. Fieger had been battling cancer for several years, a cancer that finally interrupted a flurry of activity for the band that had enjoyed a noticeable rise in popularity at mid-decade. (Incidentally, the loss of Fieger was preceded by the passing of original drummer Bruce Gary in 2006.)

As I listened again to an interview I had conducted with Fieger a few days after his 53rd birthday in 2005, I was struck by how much the singer was in love with music, after all this time. Fieger was an extremely gracious and genuinely nice man, and we had a remarkable, long conversation – we talked about all sorts of things, from his love of gardening to his appreciation of the Raiders’ Mark Lindsay as one of the greatest rock singers, ever. But mostly about his love for his beloved band.

I saw The Knack a week or so later, at the new Tulalip Ampitheatre north of Seattle. Woefully under-promoted and under an unusually chilly August night sky, Fieger and Co. played for a few hundred people as if they were performing an arena show. Impossibly tight and as dynamic as one could imagine, The Knack erased decades of time passed as if their guitars were magic wands. It remains one of my most memorable concert experiences, ever.

Doug Fieger, may there be Telecasters in heaven.

I still can’t get over how you lost on Hit Me Baby, One More Time.

Oh, it was much better that we lost. I’m serious… it generated controversy, and it kept the whole thing alive a lot longer. It was great.

But you blew everybody away, and lost to Vanilla Ice!

It’s not about how good you are on television, with a “TV audience.” Vanilla Ice had been on The Surreal Life, and his popularity was up.

Did you have fun doing the show?

Oh, absolutely. I have fun doing everything. I’m happy to be still doing the same thing that I’ve loved doing all my life… and I get to make a living doing it. It’s great.

Well, that’s the thing… I joke that I get paid to leave home and stay in hotels and fly in airplanes; that’s what I get paid for. [Otherwise] I’d do it for free.

Did appearing on the show garner the band some attention?

Oh, yeah, serious attention. Audiences have been exponentially bigger – not just twice, but four times the size. It’s been great.

How did your gig at the Fuji Rock Festival go?

It was amazing. 100,000 people. Amazing. There was eight stages; we played the main stage with Foo Fighters, Coldplay, Beck, New Order… we were on the stage with the big boys, and it was nice to be recognized.

Back in the day, we were gigantic in Japan. We were on the Japanese domestic charts, which was a big deal for overseas artists. It was nice that we were welcomed back to Japan with such a great response.

From a fan’s standpoint, the story of The Knack has been an infuriating one – the breakup, no big comeback…

That’s not really true. We were really only apart for four years. And then we couldn’t get a record deal – that wasn’t our fault; it was ridiculous, I mean, we had sold eight-and-a-half million albums at the time. Capitol cut out our entire catalog for eight years, and wouldn’t allow us to earn money for an eight-year period.

If anything should infuriate the fans, it should be the music business, and not the band.

Oh, I don’t think the fans hold it against the band. What I was trying to say is that you should have been on top all along.

Thank you, that’s very nice for you to say that. We’ve always tried to do quality work. Every time we’ve gone into the studio, every time we’ve written a song, every time we get up on stage, we try to give 110 percent. I’m proud of every song on every record we’ve made. We’ve done exactly what we wanted to do… the difference has been the music business.

For example, Get The Knack was meant to be a double album – the first two albums were actually the “first album.” Capitol wouldn’t release a double album. Again, the record company created a problem. If we had released a double album, we wouldn’t have been slagged by people as if …But The Little Girls Understand was an inferior product – when it was really just, as Guns ‘n’ Roses did many years later, a record of stuff that just had to be left off the first album. No space for it.

We did a show with Journey a couple of years ago. Neal Schon came up to us backstage and said, “Man, your second album was one of the greatest albums ever recorded.” I said that he must be mistaken – he was probably talking about our third album, Round Trip. He said, “No, no, Let The Little Girls Understand.”

So, there were fans who really loved that record, but it had the stigma of being this “less successful” follow-up to the first album. But it sold two-and-a-half million copies, which is not so bad.

Steve Stav
The Knack at the Tulalip Ampitheatre, 2005.

With the revival of power pop – Green Day, etc. – perhaps the time is ripe for another shot at mainstream success for The Knack.

Well, we do what we do. I have no fantasies of becoming successful on the charts again. The fact that I’m making a good living doing what I’m doing… and 27 years after the band started, people are still calling me up to interview me, that’s great.

We just played a show at a regular outdoor concert series here in Woodland Hills last night. It was huge; 5,000 people showed up to see us. I had no idea that many people would show up!

People continually come up to us and say, “You’re better than you were 25 years ago.” Hopefully we are. If you don’t get better at something after years of doing it, you should give it up.

Did you form The Knack as a power pop, Mod act?

“Power pop” was a term invented by Pete Townshend to describe The Who back in the ’60s, at least that’s when I read about it.

We did have an idea of forming a band influenced by The Who and The Kinks – our two main influences. That was the idea, but nobody called it “power pop” in the beginning.

Were you impressed by The Jam’s power-pop, Mod splash overseas?

I went to see them at the Whiskey-a-Go-Go when they were on their first tour here. I wasn’t that impressed. I mean, I liked their energy, I appreciated the fact that they were doing the Mod thing, but…

How about your cross-town rivals, The Beat?

Well, I had known of Paul Collins when he was in a band called The Nerves, with Peter Case and Jack Lee. I went to see The Beat, he was a friend.

I never felt we had a rivalry with anybody. We had our own scene, our own group of fans, our own thing. We weren’t part of the punk crowd, or anybody else’s crowd. We were fortunate that (in LA) there was no specific “big thing” going on at the time, and we found our own way quickly. We were ready.

Were you scared of the sudden rush of success?

Oh, yeah. I don’t know about scared, but it was… overwhelming. I thought I was ready for it, but there was no way to prepare yourself for something like that.

And it really was instant. We were playing a club like the Troubadour – 300 people – one night, and the next day we were the biggest group in the world. It was crazy, really crazy.

With that beat, that bass line, didn’t everyone think “My Sharona” was going to be a huge hit after first hearing it in the mixing room?

Well, Mike Chapman did. Actually, Capitol didn’t want to release it as a single. They thought “Oh Tara” should be the first single. That’s why the album went to Number One before the single… “My Sharona” wasn’t released until two weeks after the album.

What happened to your Sharona?

She’s one of the most successful real estate agents in southern California. Sharona is the mother of two beautiful children. We’ve stayed friends, we talk a couple of times a year.

I’ve rarely interviewed someone who has adjusted to the ups-and-downs of the business as well as you have seemed to. I detect very little, if any, resentment.

Resenting what happens to you that’s beyond your control – there’s no purpose to it. Everything in life is designed to teach you something. I certainly wouldn’t resent something that’s brought me such wonderful opportunities as a song like “My Sharona” has.

Also, “My Sharona” is a fun song to play. Ask anybody who’s played it.

Click here for more photos of The Knack at the Tulalip Amphitheatre.