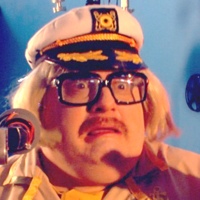 On top of all this, the film looks amazing. While shot digitally for the most part, the film has been treated and digitized to look like an authentic ’70s grindhouse find, with all the scratches and film degradation one would expect from such an artifact. The set and costume designers did their homework. For the most part, the costumes look authentically ’70s, rather than kids playing dress-up. While alert viewers can figure out which sets are actual locations and which ones were made for the production, the sets look authentic, especially the scenes in the disco. The music sounds almost like the sort of disco you’d hear in an Italian Saturday Night Fever rip-off, and the constant star shots coming from the lights will have viewers dancing in their living rooms. The disco scenes also recall notable disco-featuring films such as Carrie, Prom Night and Avenging Disco Godfather, with the DJ’s constant entreaties to “put your weight on it.”

The gore effects are impressive. In this day of fake-looking CGI blood, it’s always refreshing to see the real fake thing gleefully splattered around, giving a weight and texture that computers just can’t capture yet. As stated earlier, you’re in for decapitations, throat slashings, a ripped off penis, disco ball electrocution, and a pulled out and licked heart. On the commentary track, there was no mention of the actual budget, which I would be interested in hearing, as the movie looks impressive, no matter how much (or little) was spent.

The acting and script work well, with the actors taking their lines seriously. Well, as seriously as they can. By playing the roles fairly straight, the movie is funnier than it would have been with the actors playing for laughs. The actors have a great rapport with each other (it doesn’t hurt that the two leads are actually married), which keeps the mood light. Speaking of actors, there is a ton of nudity in the movie. Like, every 15 minutes or so. So if you’re offended by nudity, you should probably find another heart-pulling out, penis-ripping movie to watch.

Apparently director Richard Griffin has made several other films in Rhode Island, many with members of the Disco Exorcist cast. If Disco Exorcist is any indication, here is finally a low-budget/cult director who gets it. By taking the movie seriously, not relying too much on CGI, and showing attention to detail, Griffin has created an outstanding genre piece. Here’s hoping his troupe continues to make more.