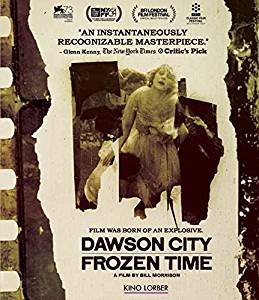 All art is ephemeral, it just takes longer to destroy some forms than others. Early film is particularly problematic: it’s nitrate stock was not only unstable, but it tended to spontaneously combust and it killed a few thousand people over the years. Some of these nitrate films were copied to acetate and then digital, but there’s a long shopping list of “Missing Films” only known from advertising or reviews. Amazingly, a large cache (over 500 reels) of nitrate films survived after burial in a permafrost landfill in beautiful Dawson, NWT. If you’ve ever seen the gold rush footage of lines of men climbing near vertical mountains to achieve riches, its Dawson’s gold strike that drew them. This film talks more about how these films arrived in this no man’s land than what important finds came from this mine. But we do see a good part of the restored film, or at least small clips of century old lust, romance, and crime, all presented without sound or much context.

More a doc about a small town than about cinema history, this film is well constructed but leaves more questions unanswered that answered. No question film historians are eager to peer back into the earlies days of the art forms, but did this cache yields anything truly significant like Annette Kellermans Neptune’s Daughter or Hitchcock’s The Mountain Eagle? This question is left open, and its not even clear if any entire films were retrieved. Having said this, it WAS a hypnotic experience watching slivers of the past slide by, often damaged and incomplete. Images of the Lumiere Brothers appear with their early cameras. In another segment, a man shakes a disembodied hand protruding from the destroyed film stock. Thomas Edison invents something, and archival footage from more established and well-preserved film intermixes with these old bones. These people on screen could have been my grandparents, maybe even their parents, and its just a bit weird to see them as active, attractive people doing the things regular people do.

I must recommend this film if you are a film buff, but I warn its parsimonious with backing info on the treasures reconstructed. We meet the people who discovered this material and worked to preserve it, and they deserve our praise. With little audio narration, we see a stylized version of how the silents worked: exposition through action punctuated with title cards providing critical details. Their story is both mundane and daring, particularly regarding the business of moving a ton of explosive film stock from the back side of nowhere to the relative safety of Toronto where real restoration could occur. This film may be hard to find, The Enzian in Maitland FL only just barely got it for a single screening on a Sunday afternoon. It may or may not end up digitally available but it is exactly the sort of cinema project that might disappear come the digital apocalypse. But that could never happen, could it? I didn’t think so…