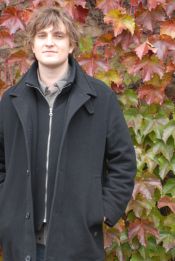 As we watched a herd of Chicago undercover cops swarm and then wrestle a frantic suspect down to the ground and shove him in the squad car I told James Walsh- lead singer of Brit-pop band Starsailor- that not all of Chicago is like that, I promise. He said it was okay and that yesterday he and the band had been to Water Tower Place in the North Loop, a less likely crime scene in a more tourist-friendly part of Chicago. A cold, shivery wind picked up and James pulled up the collar on his Navy pea coat, assuring me that he’d seen stuff like that in the UK. I told him this isn’t really that bad of neighborhood. He chuckled and we headed away from the future CSI-Chicago set.

With all sting operations behind us we finally got to talking at a local monolithic national bookstore chain about the important issues surrounding Starsailor: Gnarls Barkley, Jeff Buckley, the inspiring Omaha music scene, growing up in Chorley, England, promoting a new album on a new label and trying to win over American fans in a somewhat unfamiliar cultural and musical landscape. Going against his claim of being a self-proclaimed introvert we talked longer than the time we agreed upon. Maybe it was because we were talking about things we both have in common: a love for music and that we were both going to be in the gender minority at a James Blunt concert later that night.

Besides being a lead singer in a band you also DJ ?

It’s not a professional thing, it’s just playing records. I don’t really know how to mix or blend them properly but it’s good for afterparties. After this L.A. show at a hip-hop club I used my four hip-hop records, I milked ‘em pretty good- stuff like Gnarls Barkley and Jay-Z.

Are you guys going to cover (Gnarls Barkley’s) “Crazy” tonight? It seems like a lot of bands are trying to recreate it live lately.

Probably not, we’ve had a go at it lately. It’s an amazing song, sort of transcended the genre. I think every artist is trying to go for that one song which cuts right through. You don’t have to be into that type of music to like the song. Like “You’ll Never Walk Alone”, or “God Only Knows” a song that everyone can like, your granny or your younger brother Eminem fan.

Is that the purpose of music?

Sure. Why keep it to yourself? I want to reach as many people with our music.

How did you first encounter music?

The town I’m from [Chorley] had an atmosphere that made me want to do the opposite of what everyone else was doing in the town.

I was always a bit of an outsider when it came to liking music. Most people liked either sports or academics. Not much of an outlet for music. When Oasis and Blur broke that changed my life, with them being from the north. Going to Main Roads and seeing them live was very inspiring! Going to their show changed my life.

Was that the first show you saw?

No, I saw the Boo Radleys. For awhile I tried to imitate (Oasis frontman) Liam Gallagher’s cockiness. I struggled to emulate him because I’m more of a laid-back introspective kind of person. Then I discovered Jeff Buckley.

What was it about him that inspired you?

I really related with his laid-back introspective side but also how he could still rock out. Like him, I started out in a choir. He showed you could have a great voice and still play rock music.

So what rock artists did you first learn from?

Where did you get the albums from?

My dad had a good collection and I also borrowed some from my older brother.

Do you come from a musical family?

No, not really. Chorely’s not much of a music city. Some bands here and there. Not much of a music community there, more competitive if anything, which is sort of unhealthy. I get inspired by what’s going on in Omaha with Bright Eyes and Conor Orberst and like what happened in Seattle in the early grunge days.

What’s the songwriting process with Starsailor?

Very collaborative. I bring in a riff and we just jam around it, very laid-back. It varies. Sometimes I write a whole song and bring it to the guys. The rock songs are more collaborative and the laid-back songs are more my songs. I’m not a dictator at all. I’ve known Ben Byrne (drums) and James Stelfox (bass) for ten years and Barry Westhead (keyboards) for about four years. At first, I did only vocals and we went through a few guitar players. I started to learn guitar and was better than most of the guys we would have come in. I still don’t know any scales but it all seems to work. I don’t want to overstudy and be like other players who just copy and never create their own style.

What inspired the songwriting and lyrics for the new album? It has more of a punch to it than the last two.

Watching the news. Crossfire especially. I heard the horrible screaming and yelling in the background as the reporters covered the Iraq war on radio and TV and it moved me. “Jeremiah” was one of those songs, too, where I felt I needed to say something about what going on in the world as we’ve been traveling and touring in Europe.

How was it recording with Rob Schnapf?

It was a good time. We planned on recording with a harder edge this time around and we like what he did with Foo Fighters, Beck, Elliot Smith. With those artists he created a balance of laid-back and aggressive. That’s what we wanted for this album. “Counterfeit Life” is one of the edgy ones and “Jeremiah” has the slow burn to it.

On the Outside is your third album, and after a #4 debut album (Love is Here, 2001) and follow-up platinum album (Silence Is Easy,2004) in Europe, you’re on a new label trying to introduce Starsailor to a relatively new US audience. Any expectations?

We’re really trying to get a foot hold in the US. We’ve got a loyal following. We want to expand on that. We left Capitol and we had Artist Addiction Records release the album. It was sort of touch and go to get the funds together to tour the album. So it was amazing went it all came together. Being on the James Blunt tour helps with support, we hope to build on that. The fans seems to be warming to us.

What songs have been connecting with US crowds?

Actually, what’s been kind of strange is the reaction to “Alcoholic”.

US crowds have been laughing or giggling when I start singing it.

That’s strange. “Alcoholic” is definitely not a humorous song at all.

I know. When I start with the first lines of the song people start giggling and I hear this laughter from the crowd.

Hmm? I’ll have to pay attention to that during the show tonight.

Yeah, I don’t get it. “Good Souls” has been a crowd pleaser, though. I try to keep the focus on the audience. Live shows are for the audience, you’re supposed to connect with them. I always try to let their reaction take me and the band to the next level. Playing the crowd favorites can be good too. You can sometimes reinvent the popular songs.

I saw a lot of that at Lollapalooza here in Chicago, back in August. A bunch of bands covered “Crazy” and each time it sounded different. Each band seemed to be trying to make it their own, a healthy competition among the bands. You’re right, though, getting a foothold seems to be key for bands coming over and trying to connect with a new American audience. You guys have had a couple trips to SXSW in Austin, before the debut album Love is Here in 2001.

Yeah, we played in between Neil Finn (Crowded House) and Ed Harkel. We were sandwiched in between them. [laughs]

Do you feel like you have to do present yourselves all over again, to get that US fan base to grow?

Absolutely. The foothold in the US is important because the US seems to be a bit more loyal than the fans in the UK or other parts of the world where it’s more cyclical. You can have a great debut album over there but that doesn’t mean you’re going to keep those fans through your career. U2 is a great example where once they were in the US it went from strength to strength and their popularity grew and grew. In the UK, if you fall out with the two main media outlets it gets hard to get back on top. If Radio One stops playing your song or NME stops putting you in their magazine, connecting with the audience gets more and more difficult. Where in the US what seems to be quite powerful at the moment is getting your music on television shows. Grey’s Anatomy broke Snow Patrol. Most Americans I talked to about Snow Patrol say yeah, “that song I heard on Grey’s Anatomy.”

How was the touring with The Rolling Stones and Roger Waters in Europe?

Excellent. But we’re really running out of heroes to play with, though. We’ve met Bono, too. Great things to tell the grandkids. U2’s longevity is something to shoot for. When a kid from a band who had just got a deal with a label came up to me and said he was at one of my shows and was inspired, it made me feel great but sort of made me feel old. I guess that’s what happens eventually. It still feels strange though but I will always remember what it was like trying to make it as a musician.

Starsailor’s US tour ends mid-November and amidst a sea of anxiously awaiting James Blunt panderers (who nearly blew out both of my ear drums when he finally trotted on stage), I tried, like I promised, to pay close attention to what happened during Starsailor’s confusing “Alcoholic” song. I’m closer to understanding what might be causing the giggles and undesired laughter but I can’t quite put my finger on it. What grabbed me was the apparent courage of the Chorely native and his overwhelming desire to win over US audiences. I grinned while I wrote on my notepad because James wasn’t completely honest with me about his DJ-ing plans for the night. In a more abrupt method then a seamless blending of vinyl-based beats, he gambled and ambitiously led his quartet to attach a rock-tinged snippet of Kayne West’s “Gold Digger” and a heartfelt rendition of Bruce Springsteen’s “Born to Run” onto the end of a couple of songs. I realized my time with James had ended just like it had begun; in truly arresting fashion.