“I don’t know if you know this,” explained Free Energy’s mustachio-ed front man Paul Spranger, “but usually when you play a town you’ve never played before, it’s just you and the bartender… This (gesturing to the crowd) is amazing!” 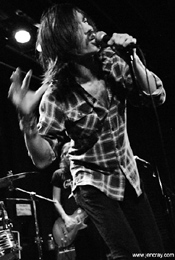 And while The Social was far from filled, it was an impressive turn-out for “a Monday night in the dead of Winter” – as Spranger generously put it – for a band making its Central Florida debut.

The loosely gathered listeners slowly meandered nearer to the stage as The Postelles’ rousing set played on – thanks, in part, to the carefree mood brought to the dance floor by a pair of inebriated blondes who were treating the evening like Prom night. Those ladies kept the audience dancing and the band in good spirits (alternately poking fun at the girls, and lapping up the attention), but more on them later. 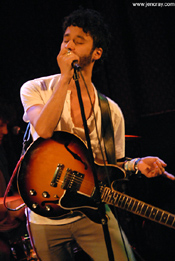 The Postelles are this unassuming band from NYC whose sound is enhanced by the grateful giddiness with which they play. How refreshing it is to see any rock band, let alone one from NYC, that genuinely looks tickled to pieces to be playing for an audience. Their fervor was infectious, which made their music – a cross between melodic garage rock (The Strokes’ guitarist Albert Hammond, Jr. produced their album) and ’60s R&B – instantly likable. Equally as charming was singer/guitarist Daniel Balk, whose confidence and swagger was bigger than his body. Playing Elvis Presley’s “Hound Dog,” as they did, was a perfect hit for the lively band and for Balk’s hot feet.

“Daniel will be giving dancing lessons (after the set),” guitarist and sometimes vocalist David Dargahi joked to the ladies who shrieked at his every move. 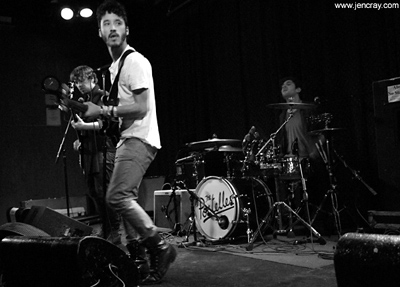 The dance party continued with the unveiling of Free Energy’s Strokes-meets-Weezer book of songs. By the looks of these Philadelphia dudes you’d expect a more ’70s psych rock sound, but the closest they get to tapping the tried and true cock rock vein is the guitar riffs that erupt from Scott Wells’ beautiful Sunburst Les Paul. Their poppy, groove-filled sound almost doesn’t fit their look, until you see them wrap it all up in the warm blanket of their approachable, generous performance. 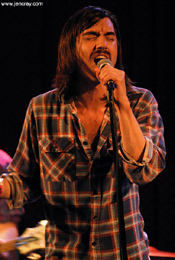 With Spranger and Wells commanding the stage in a classic singer and guitarist partnership, the group showered Orlando with goodies off of their DFA debut Stuck on Nothin’ (produced by LCD Soundsystem mastermind James Murphy), the scrumptious “Something in Common” off of their 2009 EP, and a handful of brand-new tunes off of the album they’re currently working on. The music was smooth as a pilsner, the mood was sparkling, and the lovely blondes down front were excited enough to throw up their hands in a comically outdated fashion.

“What is that? Raise the roof?” Spranger joked. “Yeah! Raise it right up!” 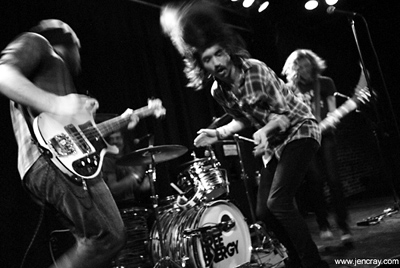 As if the band needed to further win over the already swooning audience, they sunk their teeth into an enthusiastic cover of Tom Petty’s “I Won’t Back Down.” Joined onstage by members of The Postelles, Free Energy tied a bow on a gorgeous night of new music with an old soul.

To see more photos of this show, and others, go to www.jencray.com..