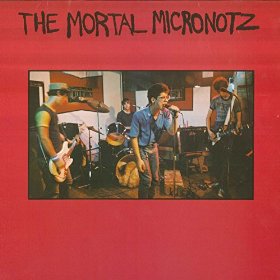 Mortal Micronotz, Smash, Live, The Beast that Devoured Itself, 40 Fingers

In the ’80s the hardcore/punk youth movement spread through the country like a slow moving virus. Far from the fashion and media centers of the coasts, people picked up secondhand clues from magazines, media exploitation, liner notes, and the few pioneering touring bands that managed to drive through.

This helped in creating regional scenes – where bands influenced each other based on shared information and influences, so that a trained ear could pick out a band from Texas as opposed to say, D.C. or Chicago.

To outsiders, of course, it was all noise, which is how punk rockers liked it at the time.

Many of these bands and scenes existed not only under the radar of normal people, but they took a little digging even for dedicated punk rockers. Luckily for record nerds many of these previously obscure bands have been rediscovered, cleaned up, and reissued, giving a second chance for the greater world to discover bands that might have been toiling in regional scenes and faced with poor distribution. The Micronotz are the latest recipients of reissuing, hopefully resulting in more listeners discovering one of the more underrated punk bands of the era.

The Micronotz (originally the Mortal Micronotz) were a group of teenagers in Lawrence, Kansas who released several albums that reflected the influences of touring bands (Lawrence being a college town was a regular tour stop), yet had a sound and style uniquely their own, reflecting the lives and frustrations of kids in the Midwest.

Their 1982 self-titled album is a bit slower than the prevailing hardcore style, even with the songs only averaging about two to three minutes. With John Harper, a guitarist who secretly wanted to rock, and Dean Lubensky, a singer with a snotty, Stiv Bators-influenced voice, their early work is a solid, garage-punk album dealing mostly with day-to-day concerns – cops, rich kids, girl problems. The band even got beat writer and Lawrence resident William S. Burroughs to provide lyrics for “Old Lady Sloan,” a fact that doesn’t seem to come up in his biographies. In “Blond Haired Ghost” a listener can detect signs of their later work, as well as a band that probably heard some Descendents records and adapted them into their style.

Next years’ Smash and a live release from an unreleased video project continue in the same vein as the self-titled album, the songs still average around two minutes with an overall sound that recalls future Midwest garage punks Gaunt. “Dean’s Lead” on the live album would later be reworked as “Polyester Slave” on the future The Beast that Devoured Itself and Smash includes a cover of “I Got a Right which just makes perfect sense.

With the departure of Dean Lubensky, the Micronotz were able to pull off the ever-tricky lead singer replacement, with Jay Hauptli providing a gruffer vocal style, similar to Motorhead’s Lemmy or Warner Brothers’ Yosemite Sam. His vocals and extra guitar would suit the band on The Beast that Devoured Itself, one of the most underrated and unheard albums of the American punk scene.

Beast captures the band stretching out, coming to terms with rock and even throwing in some ballads in Oh Baby even if the chorus tweaks the form with the lyrics “I hope this pop tune don’t bring you down.” Somewhat recalling a Replacements from the cornfields, Beast’s songs are still unmistakably punk, but the guitar leads and solos in songs like Proud to Be a Farmer show a greater range and melodicism than their previous work, as well as the introduction of an occasional harmonica and a rhythm section that has grown tighter since the self-title album.

The band followed up with 40 Fingers. There’s a good album there, but the studio polish hides it, and the cover of “Scarborough Fair” will probably scare most reasonable people away. Which is a shame, because there’s some good, melodic punk on there, like “Pay Your Bill” or “Exit 301” which would sound great with a bit more grit. The reissues by Bar/None Records are much clearer than the previous CD releases, where the listener can actually discern two guitars on The Beast that Devoured Itself. Sadly, the reissues are digital only, which seems like a missed opportunity, since most of the people interested in these albums would love actual physical copies with extensive liner notes and photos and whatnot, but hopefully someone could be poking around Itunes and stumble upon The Beast that Devoured Itself, much like people used to do in record stores and spread the gospel of this underrated, nearly unknown classic Kansan punk band.